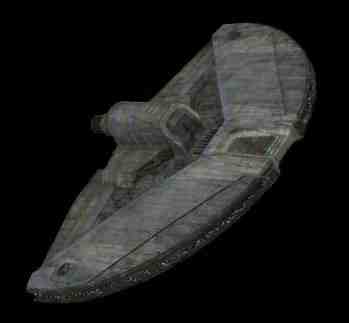 Description: The Presidente-Class Frigate was the frontline battle cruiser of the Commerce Guilds, designed to defend their interests across the galaxy. Unlike the vessels of the Trade Federation, the Presidente Class is a custom designed military vessel, and when the Commerce Guild joined with the Banking Clans, the Trade Federation and the Techno Union, the Commerce Guilds vessels were the only pure combat vessels the Confederation had to use against the Republic. Although smaller than most of the other capital ships in use at the time, the Presidente-Class manages to outclass the majority of ships used in the Clone Wars, but this was not enough to swing the wars for the Confederation, and the majority of Presidente-Class Frigates were hunted down and destroyed by the newly operational Star Destroyers of the Empire. However a few crews mutinied, and stole their ships rather than fighting the hopeless war against the emerging Galactic Empire, so some of the vessels ended up being sold of to fringe worlds as defence vessels, and others remain as pirate ships raiding the trade routes they once protected, but even so these vessels are now outdated and no match for modern front-line combat starships.