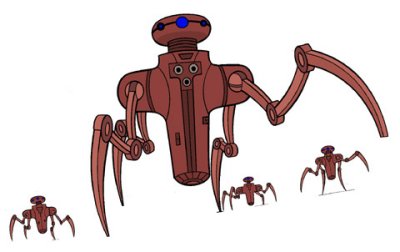 Equipped With: Move: 12
Size: 1.5 metre
Cost: Not Available for Sale


Description: As the various corporate giants merged to form the leadership of the Confederacy of Independent Systems, they brought with them industrial assets that could be converted for warfare. The Confederacy chameleon droid is one example of this.

The Commerce Guild maintained a huge number of mines on many inhospitable planets. For initial exploration of mineral resources, the Guild would dispatch probe droids via hyperspace pods. The Arakyd Spelunker probe droid was typical of such units, equipped with a sophisticated sensor array that could detect precious ores. Once the nimble droid studied the geological data of a prospective mine site, it would begin preliminary blasting in preparation for larger mining teams.

This probe droid model underwent extensive refitting by Techno Union engineers to become the chameleon droid, a covert mine- laying droid deployed by the Separatists for sabotage missions.

The chameleon droid gets its name from the use of a holographic array to project surrounding imagery in its place, effectively rendering the droid invisible. While not a true cloaking device, it is nonetheless effective against passive sensor scans.

The droid's cylindrical body contains a small repulsorlift unit. While not used for propulsion, it does lessen the droid's overall weight, increasing its agility as it travels along four articulated pincer legs. The legs could generate traction fields allowing the droid to secure purchase on the slipperiest of slopes. These droids could walk on walls and even on ceilings.

The droid's mineral sensors have been replaced with laser cannons. Its storage bay that contained its blasting charges for mining duty has been left unchanged, though military-grade mines replaced the less potent explosives.