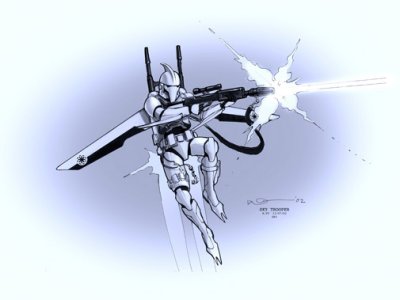 
Though clone troopers were genetically identical in design, a few elite groups underwent specialized training to better prepare them for specific environments. These combat skills were supplemented by equipment modified for use on specific terrains. The Sky Troopers are one such example of this, equipped with streamlined armour with an inbuilt jet pack and weapons they can fight high above the surface of planets no matter whether the battle is in the treetops of Kashyyyk or on the Cloud City of Bespin. This enables them to have a high mobility and to fight without aerial vehicle support although this is still limited by the small fuel supply of their Jet Pack. Clone Sky Troopers were replaced by Storm Sky Troopers but the lower levels of training and the reduced cost of their equipment means that the galaxy still remembers the bravery and ferocity of the Clone Sky Troopers many decades after the last one disappeared from the galaxy.

Page designed in Notepad, logo`s done on Personal Paint on the Amiga.
Text by FreddyB. Image is by LucasFilm, copyright resides with them.
Any complaints, writs for copyright abuse, etc should be addressed to the Webmaster FreddyB.