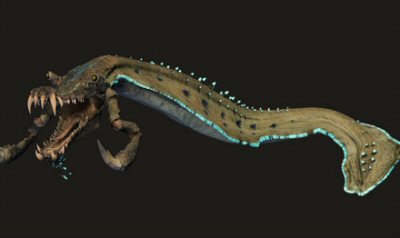 Special Abilities
Teeth: Colo Claw Fish have powerful jaws and can bite and hold their prey with amazing strength, their Teeth do Strength+3D Damage.
Massive Size: Colo Claw Fish are massive creatures, their sheer size makes them resistant to damage, giving them a bonus 2D in rolls to resist damage.

Description: Colo claw fish are immense underwater predators that dwell in the porous caverns of the Naboo core. Natural phosphorescents give its eel-like skin an eerie glow. They have flattened flukes for bodies, with a large toothy snout flanked by hooked grasping claws -- hence the name.

The colo claw fish's lethargic digestive process means it hunts less than the other underwater predators of Naboo's depths, but is no less terrifying. If threatened, the colo will lash out with amazing speed. The beast can release a bizarre hydrosonic shriek that stuns its prey. Its bite delivers a powerful poison to further immobilize its victim.

The colo claw fish has immense jaws hinged to allow the swallowing of large prey whole. Its temporomandibular claws help push prey down its throat, and its stomach expands to hold large amounts of food. After gorging itself, the colo retreats to its cave dwelling to hibernate and digest.

Representations of the aquatic monster have been part of the Naboo folk culture for ages, often used to symbolize distrust and fear.