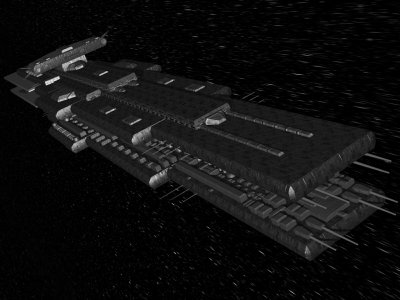 * : The Colony Ship was designed to colonise other star systems before Hyperspace travel was discovered and uses sublight travel to journey between star systems. Although slow to manuever, once its drives are activated, it can speed up over the course of a year to 0.95 of light speed, requiring a similar time to decelerate at the other end of its journey. It is because of this truely enormous velocity that it has such a powerful sensor suite, which gives it time to manuever before it hits anything.


Description: The Colony Ship was one of the first interstellar vessels ever developed, taking thousands of colonists to the distant worlds which had been determined to be capable of supporting life. Massive space constructions, the Colony Ships lacked a hyperdrive relying instead on sublight travel to carry them between the stars carrying their colonists in Cryogenic storage. The crew however weren't so lucky, manning these huge vessels for the decades that the journeys took and arriving as old people with new families to help colonise the worlds. Although most of the 500 of these vessels that were once built have been cannibalised for their technology by their new worlds, some however still remain as airless hulks orbiting their worlds. A couple of these ships remain as museums and memorials to the brave few who put their trust in technology and thrust their way out to the stars, but many more were lost with all hands aboard, disappearing without any word, perhaps still rushing onwards to destinations unknown.