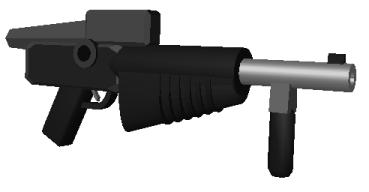 
Description: The Compact Repeating Blaster is a smaller version of the standard Light Repeating Blaster, and although is has a smaller energy capacity, and lower range, its size is considered to be a major bonus in using this weapon instead of a normal Blaster Rifle. The foregrip allows this weapon to be easily handled, and it was marketed as being more convenient to use aboard the cramped conditions aboard starships where its shorter range was no disadvantage either. However these were justifications for a poorly concieved weapon, which had no major advantages over its main competitor, and sales have remained significantly lower than BlasTechs T-21.