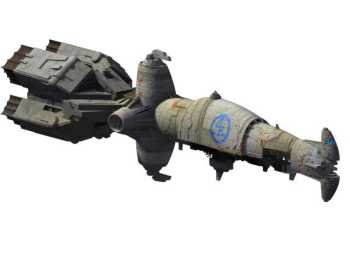 Description: The Corellian CR-12 Bulk Transport is a similar vessel as the CR-90 Corvette designed and built long before the Corvette entered production and continuing to be built until recently, however the CR-12 was designed to be a straight transport vessel with a large cargo capacity and high top speed instead of the flexible and easily modified combat vessel that the CR-90 is. As a cargo vessel the CR-12 is perfect, however owner began modifying them, adding weapons and armour making them into combat vessels, something that the designers had never intended but took into consideration for their later designs. CR-12's continue to operate across the galaxy, some modified into capital ships for pirates and other groups who operate on the edge of legality, but many more just continuing to carry cargo across the galaxy as they have for decades.


Page designed in Notepad, logo`s done on Personal Paint on the Amiga.
Text completely by FreddyB. Image is from SciFi3D based on an image from Dark Horse Comics Dark Force Rising, and copyright remains with artist, Dark Horse Comics and LucasFilm.
Any complaints, writs for copyright abuse, etc should be addressed to the Webmaster FreddyB.