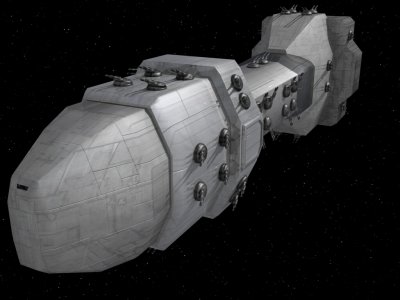 * : Although all of the Riflemans weapons are considered to be turreted, it cannot bring more than 40 to bear on any particular fire arc.

Description: Designed to provide a tactical advantage infleet engagements within starsystems, the Rifleman Gunship usually operates in planetary orbit either reinforcing planetside weapon emplacements, or firing against them in support of invading forces. The Rifleman has an extremely potent weapons load for a vessel of its size, and can bring a large percentage of its weapons to bear on targets in any fire arc which gives it a great advantage over vessels which have to manuever to fire their weapons at enemy vessels. Rifleman Gunships were introduced shortly after the Battle of Yavin, but were not produced in large numbers until after the fall of Emperor Palpatine, and proved to be decisive in a number of engagements leading to their purchase by both independant planetary governments as well as the major powers in the Galactic Civil War with the only complaint about the design being its weaker than average hull.