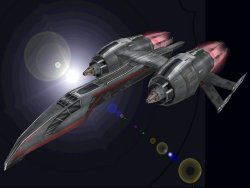 Description: The CRF-156T is a decendant of the older CRF-78, and although not offering as great a cargo capacity, this vessel is a far superior combat vessel, as well as offering fantastic speed both sublight and hyperdrive. The CRF-156T became available after the Battle of Endor, having been banned before that by Imperial restrictions, the newly released vessel became a huge hit with those who wanted a combat vessel, but needed more space than a fighter offered. Sales of the CRF-156T are monitored by the New Republic, as this vessel seems certain to attract the attention of those whose activities are somewhat nefarious and illegal, but this hasn't stopped the vessel from selling in huge quantities to mercenaries, bounty hunters as well as smugglers and pirates. A number of CRF-156T have actually been put to their named purpose, and act as message carriers and courier vessels to a number of reputable companies which stops this vessel from becoming a recognisably criminal vessel.