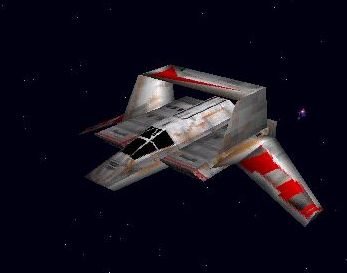 Description: Although the Starwing Assault Gunboat was very successful at combatting Rebel Starfighters on a level playing field, the Empire continued to experiment on different variants in an attempt at beating the Rebels at their own game. The Crossbow is one such variant, a Starwing with improved atmospheric performance and all round improved manueverability, but also designed to have a heavier load of Ion Weaponry. To achieve this the Ion and Laser weapons have been swapped, allowing the three chin Ion cannons to carry a heavier punch than the twin wing mounted laser cannons, although the concussion missile launchers and magazines have been left in place. A rollbar has been added to enhance the fighters performance, although in most other ways the fighter is the same as its older brother allowing parts to be easily swapped between them and the newer design to operate without new supplies being shipped out alongside the new fighters. The Crossbow was produced in small numbers and only issued to a few squadrons, its success rate not meriting the introduction of a new type of starfighter and not meriting the training of pilots that such a roll out would require.