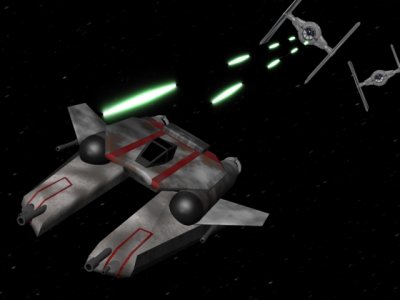 Description: Incom and Slayn & Korpil teamed up to develop a new Fighter/Interceptor code named the C-wing by Imperial Intelligence. Extremely fast, this fighter combined the best qualities of the X-wing and the B-wing fighters into a design very similar to the A-wing. The C-wing had greater speed than the X-wing and A-wing and sported a tough hull thanks to the B-wing. It could easily outperform a TIE Interceptor and could possibly be a good match for the TIE Defender. Even though the C-Wing has great durability and unsurpassed speed, it is complimented with only minimal armament, which is why it has been classified as an A-Wing. The fuselage of the fighter could easily accomodate an increased weapons payload, however the 4 fusial thrust engines draw so much power, that only a limited armament could be afforded with the little remaining power available. Unfortunately for the Rebels, the prototype was captured from the Incom main plant, while all records and plans were destroyed personally by Lord Vader himself, who also "interrogated" the Incom staff responsible for the C-Wing project. Without the plans, or a prototype, The Rebels will not be able to produce any more of this design, or have a chance to correct the power management problems. If there was some way the Rebels could have recovered and improved these plans, they would have had the starfighter advantage in any future engagements with the Empire. The Empire never produced their own C-wings due to the cost, and the fact that they already had an advantage with the TIE Advanced and Defender starfighters.


Page designed in Notepad, logo`s done on Personal Paint on the Amiga.
Stats by FreddyB. Descriptive text supplied by Jaymach Ral'Tir. Image is by "Bob the Dinosaur", copyright resides with him.
Any complaints, writs for copyright abuse, etc should be addressed to the Webmaster FreddyB.