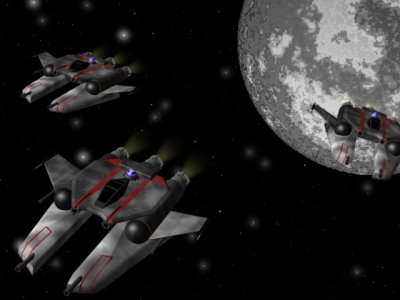 Description: The T-150 C-Wing is a custom modified version of the standard C-Wing fighter, and as well as being possibly the best starfighter ever built, is possibly the most expensive starfighter ever built. The addition of an extra engine, faster hyperdrive, improved shield generators, a slot for an AstroMech droid and improved weaponry lead to this fighter being truly devastating in combat, and truly frightening to its opponents. The weapons have been altered rather than added to, with twin variable geometry laser cannons replacing the quad light laser cannons of the T-120, although this means that these weapons pack less of a punch than before, the already impressive range has been lengthened, allowing the T-150 to hit targets almost 3 times as distant as a normal starfighter. The room freed up by the removal of two of the light laser cannons, has allowed the designers to install a second proton torpedo launcher, with firelinked with the already present launcher gives the modified C-Wing a powerful punch. The T-150 for obvious reasons was never sold on the open market, and became available only after the New Republic recaptured the C-Wing plans from the Empire, and the production run for this modified design never exceeded 200 finished fighters, which is a minute amount in a very large galaxy. The few fighters that were completed were grabbed by New Republic special operations teams, and by high ranking individuals within the Republic who felt their rank demanded protection by a fighter of the T-150's quality.