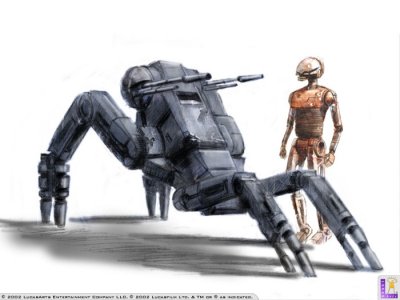 Description: These heavy combat droids were designed to patrol and defend installations and ships, mainly being purchased by corporations to defend their premises from attack and burglary. However with the Mandalorian and Sith Wars occuring they were purchased in limited numbers by the Republic to free up troops for more vital roles than guard duty, and in more massive numbers by the Sith to aid their troops in combat. However these droids were too slow to act effectively in battle, a problem which resolved itself when the Star Forge was used to create far more advanced combat droids allowing the Czerka Patrol Droids to be reassigned to far more suitable positions protecting and helping to police captured territory.


Page designed in Notepad, logo`s done on Personal Paint on the Amiga.
Text by FreddyB. Image is from Knights of the Old Republic, and copyright resides with LucasArts / BioWare.
Any complaints, writs for copyright abuse, etc should be addressed to the Webmaster FreddyB.