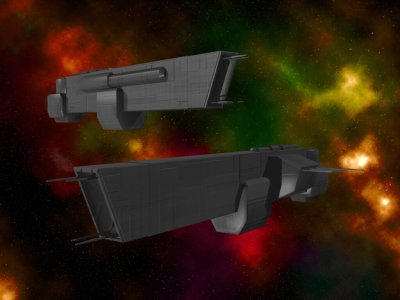 Description: The Dalas-Brac Starfighter Carrier was designed and built in the years following the Battle of Endor, since Starfighters were the superior force in space combat during that period. With squadrons of starfighters capable of engaging and destroying most capital ships, it became necessary for any military force to be able to field as many fighters as possible. The Dalas-Brac Class was sold mainly to mercenary and independant fleets, since the New Republic and Imperial Remnants both had their own carriers, and in this limited market place the vessel was fairly successful. Dalas-Brac's are puny against other capital ships, having only two turbo laser cannons to cover its front and sides, and no anti-capital ship weaponry to its rear at all. Also for a vessel its size, the Dalas-Brac has few anti-starfighter weapons, relying on its starfighter squadrons for defence and attack capability. Most consider the vessel too large for its role, although it does provide large numbers of support personel and repair bays to keep its squadrons operational, these vessels devote most of their internal space to their large outdated engines, and to the support systems required by their starfighters.