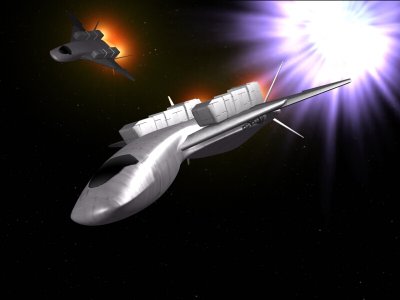 Description: The CorelliArms A-384 DarkFury Starfighter is an older starfighter design from a company that would one day become integrated into the Industrial giant that now is the Corellian Engineering Corporation. These starfighters were modified atmospheric fighters with cockpit pressurisation and large booster engines added to allow them to take off from a planetary surface. Although now a weak starfighter these vessels were state of the art for over a century until the Naboo N-1 and Incom Z-95 Headhunter were released shortly before the foundation of the Empire. DarkFury's are now used by very few people, although have developed a discount level of pricing, but their lack of shielding and hyperdrive coupled with slow speed and a weak hull makes them unpopular with those who are forced to pilot such an ancient vessel.