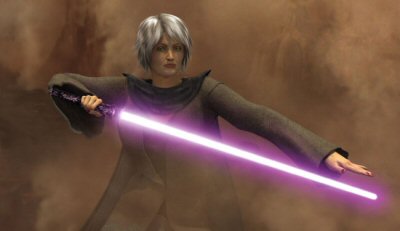 
The Dark Woman was a Jedi Master of great power and skill who lived during the waning days of the Old Republic. Born as An'ya Kuro, she sacrificed her given name upon becoming a member of the Jedi Order. Little is known of her background, although it is suspected that she received training under a Sith Lord (perhaps Darth Bane) prior to becoming a Jedi Knight. She was known to possess many Force powers uncommon among the Jedi, such as the ability to control plant matter and pass through solid objects. Her lightsaber was particuarly ornate, modified or perhaps built with artificial plant vines wrapping around it. Like Mace Windu, her lightsaber had a purple blade.

She trained the infamous bounty hunter Aurra Sing as well as Ki- Adi-Mundi before Yoda took over his training. In addition, she tutored Tusken Jedi A'Sharad Hett along with Sing and Ki-Adi- Mundi. Sing abandoned her training to become a dangerous foe to the Jedi Order. The Dark Woman's failure with Sing made her unpopular with many members of the Jedi Council, save Ki-Adi-Mundi.

The Dark Woman survived the Great Jedi Purge and went into hiding in the Cophrin System on the Outer Rim. However, she was discovered by the Emperor's Hand Mara Jade, and Darth Vader was dispatched to destroy her. During a climactic battle, Darth Vader succeeded in incapacitating the Dark Woman, but she quickly transformed herself into a Jedi Spirit before Vader could deliver a final, killing blow, "dying" in a sense like Obi- Wan Kenobi and Yoda.


Page designed in Notepad, logo`s done on Personal Paint on the Amiga.
Stats by FreddyB. Descriptive Text and Image is from Wikipedia, copyright remains with LucasFilm.
Any complaints, writs for copyright abuse, etc should be addressed to the Webmaster FreddyB.