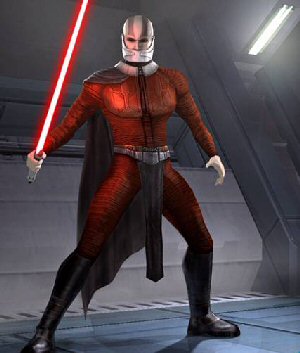 
For thousands of years, the Sith and the Jedi have waged war, with control of the galaxy at stake. Though the Jedi Knights did not seek to rule, they served the Republic in their efforts to vanquish the Sith Lords. In the darkest reaches of the distant past, the Sith would strike in full force, seeking to exert their dark will upon a terrified public.

Four millennia before the Sith would eventually subvert the Galactic Republic into a New Order, the galaxy was still reeling from the last great Sith uprising. Licking its wounds from the Great Sith War, the Republic again found itself on the defensive as Mandalorian raiders attacked from the Outer Rim.

The beleaguered Jedi Knights fought valiantly to repulse the Mandalorian marauders. Foremost among the heroes of this era were the Jedi warriors Malak and Revan. Revan's clever military strategies proved successful time and again, while Malak gained a reputation as a headstrong warrior who would recklessly charge into danger. Malak's former Masters were well aware of this impetuousness during his days at the training academy on Dantooine. They were hesitant to unleash Malak onto the battlefields, but the strains of the Mandalorian Wars left them few options.

Turning the tide of the Mandalorian attacks, Malak and Revan pursued the fleeing forces into uncharted regions of space. All contact was lost between the Republic and the two Jedi warriors. In the unknown regions, something terrible happened. The two Jedi heroes succumbed to the dark side, and would return to the galaxy as Sith Lords -- Darth Revan as the mentor, and Darth Malak as the apprentice.

The Sith Lords had somehow amassed a huge military force, and with each world that they conquered, they added to their legions. Disturbingly, many Jedi Knights and Republic soldiers switched sides, joining forces with the growing Sith movement. The Republic stood on the verge of collapse from the repeated attacks of Darth Malak's forces.

Fueling the Sith conquest was the Star Forge. An ancient device of amazing Rakatan engineering, the Star Forge was an immense space-bound factory station that churned out an endless supply of vessels and combat materiel. Revan and Malak had found clues to its existence during their time in the Unknown Regions, and were able to uncover the Star Forge's location in orbit over an incredibly ancient world.

The Jedi Council, in a last ditch effort to stop Revan and Malak, engineered a trap for the Sith Lords. Though the snare neutralized Darth Revan, Malak escaped and took control of the Sith forces. Some claim that Malak fled the battle. Others maintain that he survived simply because he was stronger than Revan. Still others believe Malak turned on Revan, using the Jedi's attack as an opportunity to wrest control from his former Master's failing grip. Whatever the truth, Malak survived, and returned with a vengeance.

From the bridge of the massive cruiser Leviathan, Malak would order the razing of entire worlds. Planets such as Taris and Dantooine felt the might of the Sith Lord's wrath. Commanding Malak's fleet forces was Admiral Saul Karath, a former Republic officer. Malak took on an apprentice, Darth Bandon, to do his bidding.

Revan, a Jedi captive, was stripped of all memories of a Sith past, and was turned into an agent of the Republic. Jedi observers closely watched Revan as the "reformed" Sith traced the path blazed during the initial search for the Star Forge. In this manner, agents of the Republic were able to find the station and confront Malak.

This confrontation erupted into a massive battle as Republic fleet forces arrived to attack the Star Forge. Endless streams of ships poured forth from the Star Forge, striking against the amassed warships of the Republic. The Sith Lord had grotesquely adapted the Rakatan device to draw energy directly from chained Jedi captives. He replenished his life force from the captives by draining theirs. Malak was nearly unstoppable, but the Republic emerged from that epic conflict victorious, as the Star Forge was eventually destroyed.

Malak was a tall human who was horridly injured in a lightsaber duel. A swipe from a laser sword severed his lower jaw, and Malak was forced to wear a metallic jaw guard that hid his disfigurement from view. The guard also included a vocoder, through which Malak spoke with an eerie metallic tone.
Dex: 4D
Dodge: 9D
Lightsaber: 12D
Blaster: 6D

Page designed in Notepad, logo`s done on Personal Paint on the Amiga.
Stats by FreddyB, Descriptive Text and Image are from Knights of the Old Republic, copyright remains with LucasArts / BioWare.
Any complaints, writs for copyright abuse, etc should be addressed to the Webmaster FreddyB.