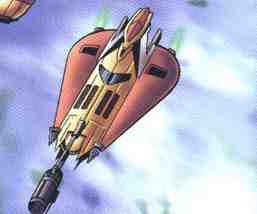 * - The main cannon of the Omega-8 charges its capacitors from the fighters reactors, releasing a powerful blast of energy when fired in a similar manner to turbolasers and superlasers, however due to the charging time the weapon can only be fired once every three rounds.


Description: Introduced after the Battle of Endor, the D'Asta Engineering Omega-8 Defence Starfighter was designed for defence of D'Asta interests although the fighter won a number of sales across the galaxy after its impressive performance against Remnant Imperial Forces that attacked D'Asta. Based on the Delta-7 Jedi Starfighter, the Omega-8 took all of that fighters good features and tried to compensate for its weaknesses, adding newer composite armour and energy shielding as well as increasing the fighters weapon load. The front of the fighter was radically modified adding a charging laser cannon capable of massive amounts of damage to other fighters, as well as quad light laser cannons to use while the main cannon is charging. The lack of hyperspace capability hampered sales of this fighter and its use remained high only amount D'Asta forces.


Page designed in Notepad, logo`s done on Personal Paint on the Amiga.
Text completely by FreddyB. Image is from Dark Horse Comics "Crimson Empire", and copyright resides with Dark Horse Comics/Lucasfilm.
Any complaints, writs for copyright abuse, etc should be addressed to the Webmaster FreddyB.