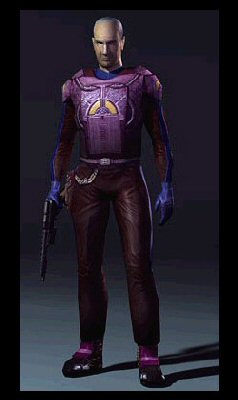 
Since before the Republic, criminal empires have thrived. Xim the Despot held together worlds through tyranny. The Hutts defeated him and brought their own brand of oppression and injustice to the worlds they governed. Four thousand years ago, when the Republic ruled with much loftier ideals, there was still the stain of criminal syndicates controlling people's lives across entire sectors.

The Exchange was one of the most powerful criminal organizations that operated throughout much of the Outer Rim Territories in that time. The shadowy group was led by an even more mysterious entity called the Compeer, with a command structure that included individual crime lords controlling profitable worlds. The only way to be accepted into this elite group is to be nominated by several other crime lords. Controlling the world of Taris was Davik Kang. His organization specialized in smuggling contraband goods, dealing in slave trade and extortion.

According to rumor, Kang agreed to spare the life of a brilliant technician who owed him a large sum of credits in exchange for the construction of a powerful custom-made suit of armor. The suit provided Kang maximum protection, but was extremely light and flexible. The legend held that the armor was so remarkable, Davik decided to have the technician "eliminated" anyway, just to prevent any possibility of ever having to face anyone wearing a similarly designed suit.

Following a space battle between Republic and Sith forces over Taris, Republic agents were stranded on the quarantined world. A former bounty hunter associate of Kang, Canderous Ordo, helped these fugitives escape Taris by infiltrating Kang's compound and stealing his ship, the Ebon Hawk. Kang was killed trying to stop the fugitives.