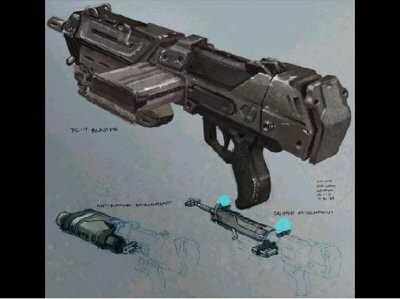 Description: The DC-17m Blaster Rifle is the standard issue blaster for the Clone commandos. This weapon is a variant of the DC-15 blaster rifle, which is what standard Clone troopers use. The DC-17m is much smaller and lighter than the DC-15. It is an effective weapon that can be used with deadly force, and can be field-stripped, and outfitted with a modular sniper attachment or anti-armor attachment. The DC-17m's primary Blaster attachment has a magazine capacity of sixty rounds, with Clone Commandos carrying up to five magazines for a total of three hundred rounds. The Sniper attachment has magazines holding five high-powered rounds, with each Commando carrying up to four magazines for a total of twenty sniper shots, while the anti-armor attachment only chambers one shaped-charge anti-armor grenade at a time though a Commando may carry an additional three in reserve. The weapon has a readout that keeps track of and displays the total amount of compatible ammunition and ordnance currently being carried by the Clone Commando. Switching the barrel attachments requires one action.

Page designed in Notepad, logo`s done on Personal Paint on the Amiga.
Stats by SpiritSpiders.com. Descriptive Text from Wikipedia. Image is from Republic Commando, copyright resides with LucasArts.
Any complaints, writs for copyright abuse, etc should be addressed to the Webmaster FreddyB.