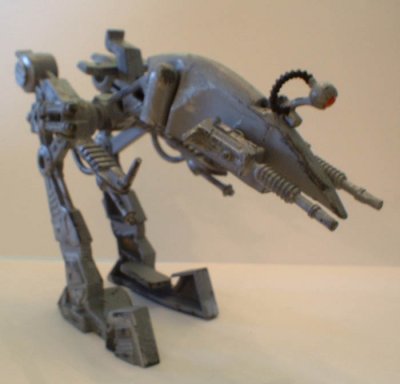 Description: The Decimator Assault Droid is a large powerful battle droid designed to look like a smaller Scout Walker, using some of the technologies used by the Trade Federation and its allies during the Clone Wars. Standing three meters tall, the Decimator is large enough to strike fear into the hearts of infantry opponents facing such a large combat droid, yet small enough to fit into a lot of military bases and buildings chasing its opponents down. Its independantly targetable laser cannons and flexible sensor eye allow it to fire down side passages and turn quickly to fire upon opponents where its body cannon fit, as well as being powerful enough to deal with most targets of speeder size and below. Decimators are extremely expensive droids, and Imperial policy dictates using the cheapest solution where-ever possible which has limited the purchase of these droids, however they have seen use on some high profile and high importance missions and bases across the galaxy and been shown to be very successful in hunting down and eliminating enemy troops with minimal input from their commanders making them a popular addition to Imperial forces and a feared enemy by the Rebels.


Page designed in Notepad, logo`s done on Personal Paint on the Amiga.
Text completely by FreddyB. Image is by "The Custom Alliance", copyright resides with them.
Any complaints, writs for copyright abuse, etc should be addressed to the Webmaster FreddyB.