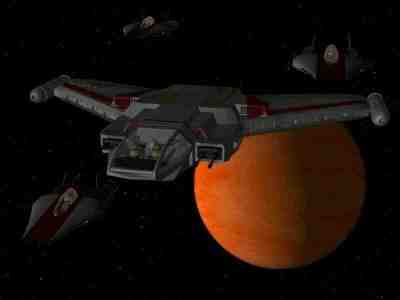 Description: The Delta Wing Transport is by the same team that developed the A Wing Starfighter, and is designed to be a dual role vessel. Mainly the ship was designed to operate as a Transport ship, carrying small cargoes between Alliance installations and vessels, however when needed the vessel also carried high powered weapons and could be loaded up as a bomber. The small cargo hold was easily swapped into a passenger configuration, allowing the vessel to carry strike teams to their targets in relative safety. The vessel is flexible enough to swap between all of its roles quickly, and much like the Lambda Shuttle, the Delta Wing was supposed to act as the backbone of the Alliance fleet. However the ready availablity of stolen Lambdas, and acquired Space Transport vessels meant that the Rebel Alliance had little need for such a vessel, and therefore very few were ever brought into service. Those that were built were grabbed by specialised groups within the Alliance for commando raids, or specialist bomber groups, making these vessels rarely seen and with a high attrition rate for a transport vessel.