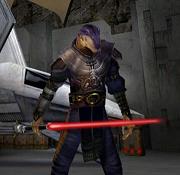 
Desann is a lizard-like humanoid of the Chistori species. Before joining Luke's Jedi academy, Desann was haunted by loneliness, being shunned and feared by his fellow Chistori, who did not fully understand the nature of the Force and regarded it dangerous black magic.

Once in the academy, Desann proved a very powerful and successful student. However, he was impatient, lusting for power, looking down on his fellow students, aggressive, and even argued violently with his teachers. During a training session he struck down and killed a fellow student, saying he was "too weak to be a Jedi." He left before anyone could help him. He became one of two leaders (the other being Admiral Galak Fyyar) of an Imperial Remnant faction seeking to regain control of the galaxy by creating an army of force-users feeding on the energy of the Valley. Since only Kyle Katarn and his partner Jan Ors know the location of the Valley of the Jedi, Desann and his student Tavion capture Jan Ors on Artus Prime, a mine for unique crystals, in order to trick Kyle into revealing the location of the Valley. As planned, Kyle tries to rescue his friend, and Desann commands Tavion to kill Jan Ors as a ruse to motivate a now Force-insensitive Kyle to go to the Valley to reconnect with the Force; and Jan remains secretly alive on the Remnant flagship, Doomgiver. Kyle, believing that Jan is dead, travels to the Valley in order to avenge her death. Desann follows Kyle, and thus Kyle unwittingly plays right into Desann's trap by revealing the location of the Valley allowing Desann to create his army of Dark Jedi warriors, called Reborns and Shadowtroopers by infusing the force into Artusian crystals and using them on stormtroopers, giving them the ability to use the Force. He attacks the Jedi Academy of Luke Skywalker, but Kyle stops him by destroying the Doomgiver (after having freed Jan) and thus most of his army. On Yavin 4 Jedi knights and New Republic forces defeat his remaining Reborns and stormtroopers. Desann escapes into the tunnels under the Massassi Temple, where he is confronted by Katarn. Each tries unsuccessfully to convert the other to their side of the force. A battle ensues in which Desann is slain.


Page designed in Notepad, logo`s done on Personal Paint on the Amiga.
Stats by FreddyB. Descriptive Text and Image is from Wikipedia, copyright resides with LucasFilm.
Any complaints, writs for copyright abuse, etc should be addressed to the Webmaster FreddyB.