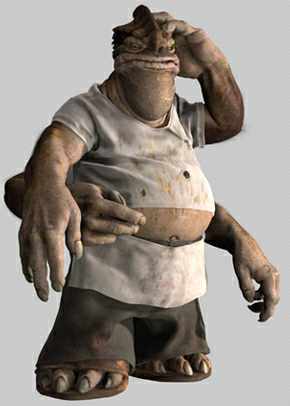 
Four-Armed: Besalisk have six limbs, consisting of four arms and two legs, while this allows them to carry more items than a species with only two, they are not an overly dexterous species meaning that they cannot wield multiple weapons with any kind of great advantage.

Superior Memory: Besalisk have amazing memorys, and gain a 1D bonus to all knowledge skills because of this.


Many in Coco Town know that Dex is not only the source of quick and hearty meals, but also unerring information on an astonishing array of topics. Dexter's past includes work with expeditionary oil-harvesting crews, manning rigs, running guns, tending bar, and brawling for a living. With his latest endeavor, Dex hoped to make a fresh and stable start, and enjoyed the more sedate and quiet life of a cook.

Dex first met Obi-Wan Kenobi when he was running a rough- and-tumble bar on Ord Sigatt, an Outer Rim mining world. Though Dex was on the wrong side of the law (his bar was a front for a gun-running racket), he took a liking to the young Jedi. Dex next opened a weapon shop on the Outland Transit Station, supplying mercenaries and bounty hunters alike. Narrowly escaping an attack on the station, Dex gave up the shadier life and sold the last of his wares, eventually settling on Coruscant.

A Jedi on an investigation has access to almost limitless information within the confines of the Jedi Temple, but not even those records are complete. When Obi-Wan's search for the origins of a mysterious dart used to kill an assassin stalled, he turned to an old friend in Coco Town.

Few would look at Dexter Jettster and instantly think "gourmand," but the burly four-armed alien added successful cook and diner proprietor to the long list of careers he had experienced in his checkered life. Obi-Wan counted on Dex to identify the enigmatic weapon, and Jettster didn't fail him.

The cook correctly recognized the small tined projectile as a Kamino saberdart, a weapon he hadn't seen since his prospecting days on Subterrel, beyond the Outer Rim. Few have ever heard of the planet Kamino, but Dex not only informed Obi- Wan as to its location (12 parsecs south of the Rishi Maze), but also its inhabitants. Dex warned that the native Kaminoans -- cloners of some repute -- keep to themselves, but are welcoming to those with the credits to spare.