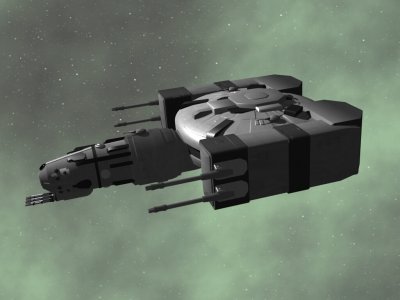 
Description: The standard attack cruiser of the Duapherm Marines (during the Duapherm-Boton Conflict), the Discril-Class is being slowly phased out of current service, as the Duapherm Planet States that they are behind the military curve. Some of the Discrils are scraped, others mothballed for future upgrades, and a few sold on the used arms market to less advanced systems. With their massive cargo holds however these vessels make fine, if heavily armed transport vessels, or have plenty of room for modification and improvement, with older weapons being replaced by turbolasers and blaster cannons and shields, faster hyperdrives and more powerful ion drives being put in place. Originally based on Corellian designs, and the Corellian Gunship was developed along similar lines to the Discril-Class although much later than this still highly prized vessel.


Page designed in Notepad, logo`s done on Personal Paint on the Amiga.
Stats and some text by RebelSquadrons.org. Image is by "Bob the Dinosaur", copyright resides with him.
Any complaints, writs for copyright abuse, etc should be addressed to the Webmaster FreddyB.