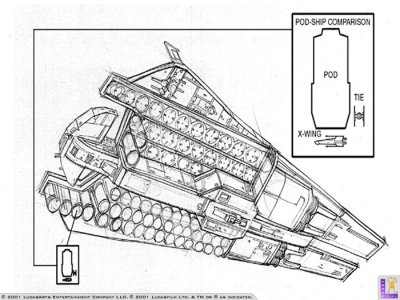 * - The DoomGiver's Assault Pods are heavily armoured troop and vehicle transporters which are fired down onto a planets surface. They are capable of carrying 30 armoured troopers on their upper deck, and four All Terrain Scout Transports in their lower deck, although some are configured for delivering supplies or speeder bikes, most are in the standard configuration for assault with standard transport shuttles handling the resupply and logistical support of an Imperial invasion. The pods are Starfighter Scale, with a 6D hull, although they carry no weapons or shields, and have only enough repulsorlift drive to allow them to survive their one way trip down to a planets surface with almost no control once they are released from the DoomGiver itself.


Description: Designed by Admiral Galak Fyyar for the Imperial Remnant, the DoomGiver Class Assault Ship was intended for planetary assault, and performed this role admirably although to detriment of all other tasks. It performed poorly in space combat, although had powerful shields to protect it from attack, shields being a speciality of Galak Fyyar, who had designed them for both Death Stars. However the fact that it could launch its 76 assault pods, containing a total of 2280 armoured troopers and 304 AT-ST's meant that it could easily assault most targets overwhelming entire planetary defense forces by itself, and impressive task for a vessel far smaller than a Star Destroyer. The only known example of a DoomGiver Assault Ship was destroyed by Rogue Squadron in orbit around Yavin Four as it began launching an assault on the Jedi Academy there. The DoomGiver design still exists, and should the Empire ever need dedicated planetary assault platforms to start seizing worlds back from the New Republic, these powerful ships may yet enter production on a larger scale.

Page designed in Notepad, logo`s done On Personal Paint on the Amiga.
Text completely by FreddyB. Image is by LucasArts from design art for Jedi Outcast, and copyright resides with them.
Any complaints, writs for copyright abuse, etc should be addressed to the Webmaster FreddyB.