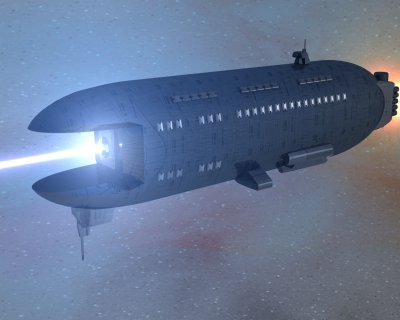 Description: The Dragon Class Dreadnaught is a recent addition to the Griven fleet, and while they have only constructed a single vessel so far which is used as the Griven Emperors flagship, thye intend to build more as resources become available. Using technology captured from the Republic and Imperial Remnants, this large vessel mounts a single forward facing Superlaser which is designed to be used against enemy capital ships and planetary targets. However the laser is not powerful enough to destroy a planet, and only the most geologically unstable planets would suffer repercussions felt more than a few hundred kilometers from the impact zone. The laser can easily destroy most cities and bases, defeating local shielding, but performing badly against planetary shields, and causing earthquakes which will devastate a large area around the target. The Dragon is named after a firebreathing lizard from the Griven homeworld, although due to the difficulty of translating the Griven language to Basic, this is not a literal translation which would be nearer to "Ugly Dangerous Evil Little Fire Vomiting Lizard". Both Imperial and New Republic Intelligence is worried about the danger of this vessel, and are working to sabotage both the construction of more of them and the vessel already in operation, something which signals the high level that Griven Technology has attained when a vessel this size sends shockwaves through the galactic intelligence community.


Page designed in Notepad, logo`s done on Personal Paint on the Amiga.
Text by FreddyB. Image is by "Bob the Dinosaur", copyright remains with him.
Any complaints, writs for copyright abuse, etc should be addressed to the Webmaster FreddyB.