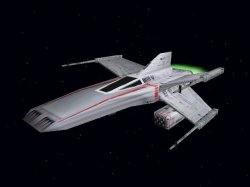 Description: The DragonHeart starfighter was designed by Galactech shortly after the Incom design team defected to the Rebellion taking the designs for the X-Wing with them. Galactech designed a fighter that outwardly resembled the X-Wing, so could take advantage of the publicity that the defection had caused. However although the DragonHeart was outwardly similar, its internal systems are far less advanced, and while this makes it easier to repair and maintain, it does lead to the DragonHeart being somewhat inferior to the X-Wing. The DragonHeart had decent sales until the refounding of Incom after the death of Emperor Palpatine, when legal action forced Galactech to discontinue production, however by this time the DragonHeart was become aged and an inferior fighter so was close to the end of its production run anyway.


Page designed in Notepad, logo`s done on Personal Paint on the Amiga.
Text completely by FreddyB. Image is bt LucasArts, copyright resides with them.
Any complaints, writs for copyright abuse, etc should be addressed to the Webmaster FreddyB.