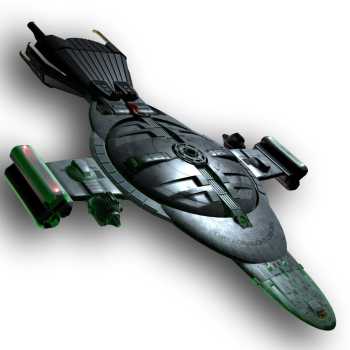 Description: Although many consider the Dreadnaught Class underarmed for a combat vessel, considering its small size, and the power of the weapons that it does carry, these starships are extremely effective combat vessels. Due to the small crew size, these were prime targets for thieves, and many found themselves stolen and added to pirate fleets, where a common modification was to swap one of the weapon arms around to focus all the weapons onto the forward fire arc making them a powerful attack ship. The Dreadnaught was designed with combat in mind, and although it is capable of long patrols away from base, the vessels interior is cramped as all available space is occupied with drive systems, weapons, shields, sensors and other combat related systems. One feature that made the vessel extremely popular with crews was the fact that both the cockpit area which housed the 6 man flight crew, and the crew quarters and living area were both capable of acting as lifeboats, ejecting from the vessels hull and moving at slow sublight speeds, with enough supplies and power to support the crew for many weeks until help arrived. Dreadnaughts are still popular combat vessels even a decade after the design was launched, selling well to independent governments and to mercenary fleets although the major galactic powers have shown no interest in purchasing these extremely efficient fighting ships.


Page designed in Notepad, logo`s done on Personal Paint on the Amiga.
Text completely by FreddyB. Image is by from the Game I-War, copyright remains with Infogrames and Particle Systems.
Any complaints, writs for copyright abuse, etc should be addressed to the Webmaster FreddyB.