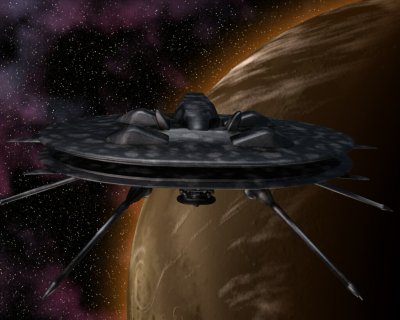 Description: As the anti-alien and more restrictive policies of the Empire took hold across the galaxy, many non-humans struggled to cope withtheir new status as second class citizens, however there was an upper class of those who were rich and powerful who hoped to avoid this discrimination. However only those who were supremely rich could avoid it completely, and those who were merely millionaires sought new ways of avoiding the Imperial rules and regulations which acted against them just because of their species. Patel Ironworks caught onto this sentiment and began building and operating these massive colony ships, carrying those rich enough to afford it away from the core worlds, to set up colonies in the outer rim where Imperial rule was somewhat more relaxed, or even in unexplored territory where they could avoid the Empire completely. The vessels have powerful sensors reaching out on spars from the main hull, and were designed to ease colonisation of new worlds by identifying planets which were near exact matches for the majority of their passengers. Also the vessels could remain in orbit as a space station providing flight control and planetary administration, or they were capable of a single landing which would allow them to act as the centre of the new colony, especially if the hyperdrives, sensors and shields were ejected first, freeing up hull space for use by the colonists. These vessels only operated for a short time before a reporter discovered that the Empire had partially funded this re-patriation of aliens from the core worlds, and many of the colonists had disappeared en-route to their new home worlds, the surrounding fury caused a number of riots on different planets allowing the Empire to inflict even more restrictions on the non-human population. Drei Colony Ships still exist, but in minute numbers, and even fewer are still flying, acting as massive passenger and cargo vessels.