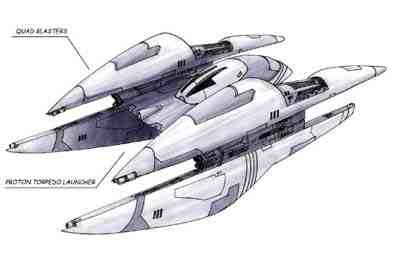 Description: The Droid Starfighter-Advanced is a larger variant of the standard Trade Federation Droid Starfighter, a larger tougher version which while still incredibly manuverable was now capable of resisting damage to a much greater degree. While its quad laser cannons still are fairly weak compared to those on modern starfighters, it uses a Proton Torpedo launcher which is as capable of packing a punch as the one used on X-Wing and B-Wing fighters. The other main improvement of the advanced model was a hugely improved logic system which operated seperately from the Droid Control vessels, this system while a fantastic pilot and gunner, and avoiding the problems caused by a control ships destruction like the distaster the Trade Federation encountered on Naboo, was notoriously bad at co-ordinating with other fighters and organising group tactics. While used heavily in the final battles of the Clone Wars, the Advanced Droid Starfighter was never produced in as large numbers as the standard one, so far fewer managed to survive into the Imperial and New Republic Era's, and those that did have become highly valued.