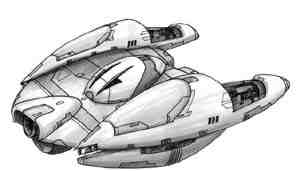 Description: The Droid Bomber is a self piloting assault bomber used in small quantities by the Trade Federation for attacking larger targets that their Droid Starfighters were incapable of dealing with. The weaponry of the Bomber is heavier than the Droid Starfighter, giving an equivalent punch to a concussion missile, but keeping the advantage of the smaller more manueverable Droid Starfighter design. Droid Bombers were not used in large numbers due to their relative weakness compared to the vessels used by the Trade Federations allies during the Clone Wars, meaning that after the Trade Federations defeat, these Droids were found in large quantities in storage and production facilities. These droids were mainly scrapped, but the fringe and black market have managed to acquire some of them which they use to great effect, and a number of worlds keep them as backup starfighters to bolster their defences should need arise, although Imperial weapon restrictions make this extremely illegal.