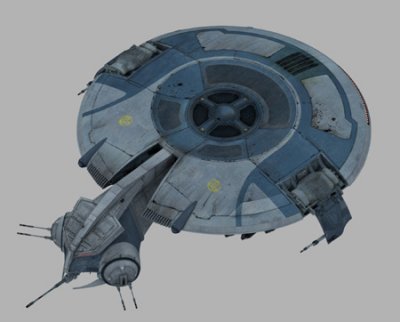 Description: The Confederacy developed this dish-shaped droid gunship in response to the victories won by the powerful Republic attack gunship during the Clone Wars. The atmospheric vehicle's flat underbelly is lined with ordnance pods, capable of unleashing rockets and bombs at distant targets. Its forward nose is packed with laser weaponry, including twin turrets each carrying two laser cannons, and a powerful forward-facing cannon. Each wingtip also carries a laser cannon.

During the Clone Wars, these droid gunships were deployed at such engagements as the Battle of Kashyyyk.

Well-shielded and lined with powerful repulsorlifts to stabilize its flight and gunnery systems, the Baktoid Fleet Ordnance HMP (heavy missile platform) droid gunship can unleash a devastating amount of firepower in a short time. Its versatile turrets can track independent targets, while its modular torpedo and missile allotment provide precision delivery of explosive payloads. Modular wing tips allow the gunship to be fitted with mission specific and additional weaponry.


Page designed in Notepad, logo`s done on Personal Paint on the Amiga.
Stats by FreddyB. Descriptive Text and Image is by StarWars.com, and copyright resides with LucasFilm.
Any complaints, writs for copyright abuse, etc should be addressed to the Webmaster FreddyB.