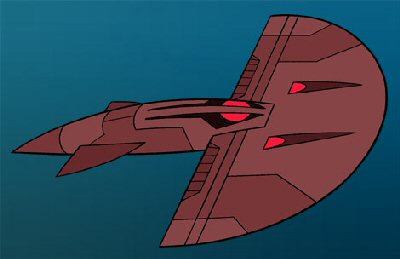 Description: Following military setbacks on Naboo, Maramere, and other water-cover planets, the Trade Federation began investing in the research and development of submersible fighter-craft. The Republic legislation that prohibited the huge commerce body from developing military droid hardware was only a momentary setback for the project -- Trade Federation officials just moved the prototypes away from Republic investigators and bribed or disposed of those who came too close to discovering their works in progress. The devout Xi Charrian engineers developed the subfighter while sequestered on remote private estates, separated from the rest of their Haor Chall religious order. As a result, their uncanny design talents were adversely affected by their isolation, and the end product did suffer a number of design limitations. Nonetheless, the resulting manta droid subfighters are still impressive fighting machines when released en masse. The sleek torpedo-like droid body is capped in front with a large wedge-shaped diving plane. The forward edge of the plane has an electromotive field, that when coupled with repulsorlift- driven supercavitation vectrals incorporated into the subfighter's design, results in a very fast and surprisingly maneuverable underwater vessel. The twin barrels recessed in the plane can sport laser cannons or torpedo launchers, and a few models even feature articulated barrel assemblies that allow for both types of weapons on the same fighter. The Xi Charrians were unable to reproduce the requested variable geometry feature found in their droid starfighter designs, however. The actuation servomotors required to change the fighter's shape in deep ocean pressures proved too difficult to engineer. As compensation for this perceived failure, though, the Xi Charrians provided -- at no extra expense -- companion craft for the fighter. This included a larger carrier craft and hydrodynamic adaptor kits for battle droid-operated MVR-3 speeders.


Page designed in Notepad, logo`s done on Personal Paint on the Amiga.
Stats by FreddyB, descriptive text by LucasFilm. Image is by Lucasfilm, and copyright resides with them.
Any complaints, writs for copyright abuse, etc should be addressed to the Webmaster FreddyB.