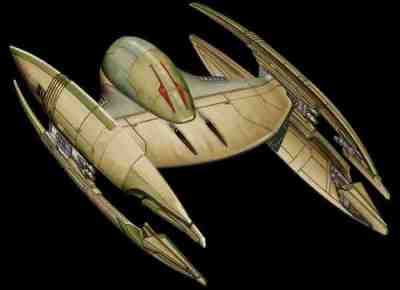 Description: The effectiveness of droid starfighters has been debated in strategic circles for generations. While droid starfighters are capable of maneuvers that would pulp even the sturdiest organic pilot, they lack the resourcefulness and cunning that living pilots bring into combat. During the Battle of Naboo the Trade Federation attempted to counter any shortcomings in their automated vulture droid designs by dispatching them en masse. Swarms of the tiny fighters were launched from their battleship's cavernous hangars, attacking the small number of Naboo starfighters defending the planet.

Like the ground-based battle droid infantry, droid starfighters are controlled by the Trade Federation's Droid Control Ship. When not in flight, the droid starfighter can transform into a walking mode allowing them to be used in surface patrols.

As the Clone Wars erupted, and the Trade Federation became one of the founding members of the Confederacy of Independent Systems, they supplied their vulture droids to the growing Separatist fleet. Painted with the blue and white hexagonal sigils of the Confederacy, vulture droids would plague Jedi and clone pilots on many battlefronts, including the decisive Battle of Coruscant.

The Xi Char cathedral factories of Charros IV manufactured a vast number of precision-engineered droid starfighters for the Trade Federation. The development of advanced technologies is a religion to the Xi Charrians of the Haor Chall order, and the droid starfighter is testament to their devotion.

When in starfighter mode, the droid carries four blaster cannons in its wings, and two energy torpedo launchers along its forward edge. When transformed into walking mode, the launchers are angled for antipersonnel use.

Unconventional solid fuel concentrate slugs housed in the aft fuel chamber power the droids. These fuels burn rapidly when ignited, giving the droid starfighter incredible bursts of energy, but a very limited range of operation. As such, droid starfighters must operate from a nearby launch base or capital ship. When not deployed, these starfighters hang from overhead recharging racks.

The Trade Federation jealously guards its new innovations, and the droid starfighter is equipped in that regard. Should it lose contact with the Droid Control Ship due to malfunction or other unexpected catastrophe, the starfighter's self destruct mechanism prevents the droid from falling into enemy hands.


Page designed in Notepad, logo`s done on Personal Paint on the Amiga.
Stats by FreddyB. Image and Descriptive Text is from StarWars.com, and copyright resides with LucasFilm.
Any complaints, writs for copyright abuse, etc should be addressed to the Webmaster FreddyB.