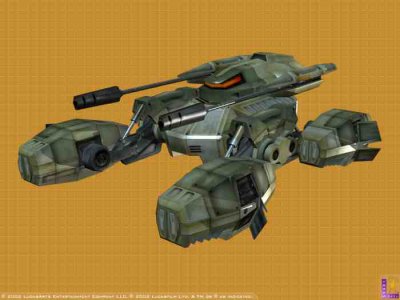 Description: The HDT (Heavy Droid Tank) was a late addition to the Trade Federations arsenal, a speedy, agile and well armed vehicle controlled by an advanced logic matrix. These droids were introduced shortly before the Clone Wars began, and saw heavy use in the early engagements of that war, fighting side by side with Hailfire droids, and other combat vehicles of the Trade Federations allies. The four powerful repulsorlift engines give the vehicle both agility and speed as well as making it an extremely stable firing platform, making this droid one of the most effective against Republic forces involved in the war. Most of these droids were destroyed by the end of the Clone Wars, but some few have survived and their reputation guarantees them a high price on the black market.