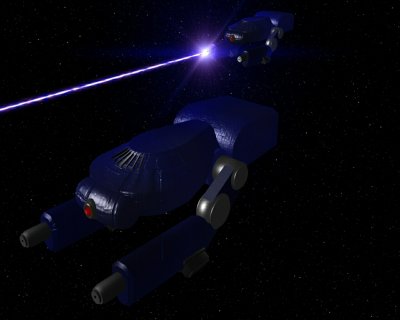 *: Although the Drone Frigate is a totally automated ship, run by a central computer, and repaired by its crew of droids, it does have some room and capability for passengers, who may be engineers or simply observers.


Description: After the destruction of Alderaan a native of that world, Almek Obsidian, became somewhat obsessive about military power, and set up Core Defence Industries (CDI) to supply defence to other worlds so the same could never happen again. However the unbalanced nature of the industrialist and the corporation he founded, led to many headaches for the fledgling New Republic, as the power weapons and vessels were sold to anyone without restriction, meaning that these state of the art weapons of war were available to terrorists, pirates and other criminals. Fortunately, for the New Republic at least, Almek Obsidian died after only a couple of years, and the absence of his genius, although unbalanced, hand at the helm meant that CDI went into receivership shortly afterwards. The CDI Tachyon Drone Frigate is an automated combat vessel designed to patrol and secure areas from enemy capital ships. The lack of a crew means that after their initial purchase, they can sit in a low power mode in orbit around the owners planet, only powering up when required, making them very cost effective after purchase. The vessel is built around two powerful custom designed Tachyon Cannons, which have more punch, and a significantly longer range than ordinary TurboLasers. So powerful are these weapons, that the vessel actually has to fire its main engines to counteract the counterforce when the guns are fired. The Tachyon is however hideously expensive, so only sold to richer worlds and in small numbers, however when an enemy faces a world protected by Tachyons, they are surely in for a vicious battle which puts fear into all but the most powerful fleets.