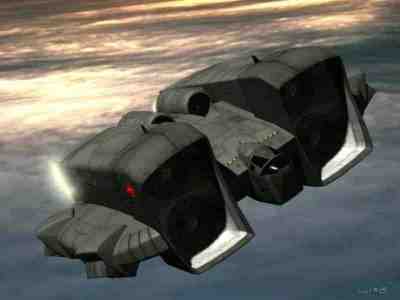 Description: The Velocity Class dropship built by Subpro has become popular with both the New Republic and the Empire as a way of getting troops onto planets fast. Capable of outrunning many starfighters, the Velocity can put troops onto a planetary surface faster than they could be deployed from a capital ship, this also frees capital ships from transport duty and and allows assaults to be performed with less capital ships being tied up in the delivery of troops, and lets them get on with the important work they were designed for. The Velocity will usually be accompanied by fighters since it is not heavily armed or armoured, but due to its speed few fighters can keep up to protect it. Most of the Velocity's internal space is taken up with its engines and maneuvering thrusters, meaning that it has little internal cargo space and cannot deliver many vehicles or supplies along with its troops, however some have had the passenger facilities removed to allow them to carry more cargo, a popular choice with the few free traders who have managed to get their hands on a Velocity.

Page designed in Notepad, logo`s done on Personal Paint on the Amiga.
Text completely by FreddyB. Image is from a web page which I`ve now forgotten where, copyright remains with the author.
Any complaints, writs for copyright abuse, etc should be addressed to the Webmaster FreddyB.