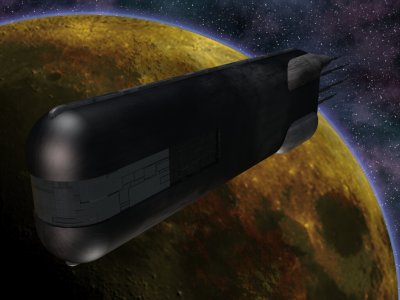 Description: The Duros blazed some of the oldest trade routes and hyperspace lanes in the galaxy as they ventured into the unknown, achieving star travel before the founding of the Republic. Although they used various small exploration vessels to chart out the safe jump routes, these small ships rarely landed on the worlds they discovered, just scanning for intelligent life, inhabitable planets and valuable resources before heading off into the unknown once more. This meant that it was usually left to the larger Duros transport and trading vessels to make first contact with new species and to forge commercial relations with them. The Solar Class Hyperspace Trading Vessel was the largest and most common of these transports, capable of travelling for many years at their slow hyperspace speed to the furthest discovered worlds. Solar Class Transports were often the first alien vessel seen by some worlds, helping lay down the seeds of interstellar commerce and the foundations of what would one day become the Republic. Obviously few of these ships survive the 15 thousand years since their construction, and those that do are mainly used as museums and memorials to the very beginnings of the galactic community and to the brave explorers and traders that flung themselves out into space.