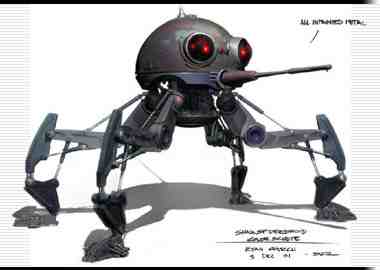 Description: The Dwarf Spider Droid is the Commerce Guilds equivalent of the Trade Federation Battle Droid, and although it is a larger and more expensive, the fact that it is as powerful as some small tanks makes it more than worth its money. The main disadvantage of this droid was that although it was roughly the same height as a humanoid soldier, it was much wider and this made it difficult for the droid to operate indoors or on space vessels, however once the Commerce Guild joined the Confederation the droid was joined by smaller droids such as Trade Federation Battle Droids and Droidekas making this very much a moot point. Fully functional Dwarf Spider droids are uncommon because the motivation system wears out fairly quickly and parts are not easily obtainable, however the droids have occasionally been left as automated turrets even when parts have worn out.