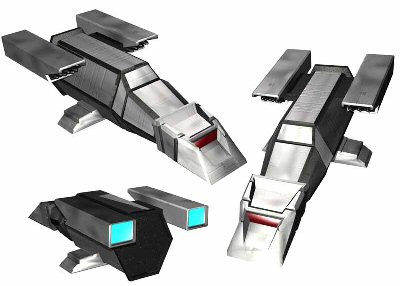 Description: The DX-9 Stormtrooper Transport saw grea use in the early stages of the Galactic Civil War, but sales began to wane with the increase of the Sentinel Class Shuttle and although Sienar was competing against itself the DX-9 was redesigned to allow it to compete once more. Although the improvements were only slight, with the improved manuevering thrusters and increase atmospheric speed, internally the transport was completely transformed. With the removal of the forward docking port, the cockpit area was redesigned to allow the pilot a more comfortable and ergonomic working area which improved crew performance vastly. A blaster cannon was added underneath the cockpit, allowing defensive firepower even once the missile launchers were empty, and the missile launchers were unlinked to allow a slower consumption of missiles. The internal rearrangement also freed up some cargo capacity, although the space for only 25 troopers was retained although now obviously they could take more equipment or speeders with them. The DX-9E was a great success, and once again made the DX-9 series common across Imperial controlled space.


Page designed in Notepad, logo`s done on Personal Paint on the Amiga.
Text completely by FreddyB. Image is from "theforce.net" based on work by LucasArts, copyright resides with them.
Any complaints, writs for copyright abuse, etc should be addressed to the Webmaster FreddyB.