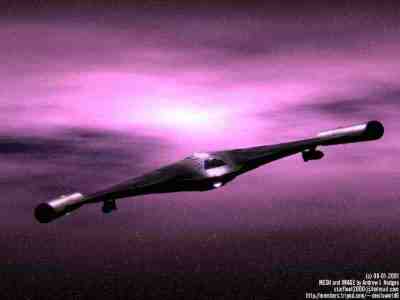 Description: The Eagle was an attempt to create a small transport vessel, capable of holding its own against fighters, while still capable of carrying small amounts of cargo. The design called for a larger frame than a traditional fighter to contain not only its cargo bay, but facilities to sustain the crew for the longer space voyages required by a transport vessel. This internal space allowed owners to refit the vessel passenger transport duties, or to use the space for modifications creating an amazingly effective combat vessel. The Mk3 was the last variant of the Eagle to be designed and like the Mk2 is still sold, upgrading the weapons to heavy laser cannons, allowed the nose blaster cannon to be finally dropped, which created space for a larger more powerful sensor suite, and allowed the designers to once again drop the external missile mountings back to 2 increasing the manueverability of the vessel once more. Heavier shields and hyperdrive were once more added, letting the vessel stand easily against its rivals, and to become an extremely well selling ship.


Page designed in Notepad, logo`s done on Personal Paint on the Amiga.
Text completely by FreddyB. Image is by Devilsworld, copyright however resides with David Braben from the game "Frontier".
Any complaints, writs for copyright abuse, etc should be addressed to the Webmaster FreddyB.