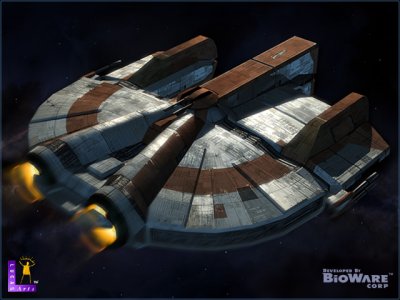 Description: Thousands of years ago, the Ebon Hawk became legendary in smuggling circles. It spent most of its operational life being used to shuttle goods for Davik Kang, the Taris underworld boss during the Mandalorian Wars. Through careful piloting and a ridiculously overpowered drive system, the ship was able to outrun Republic and Sith patrols alike, making deliveries to numerous shady characters along the galactic rim. Davik would joke that it was the best thing he had ever stolen, and for the number of times it saved his life, he had good reason to make the claim.

It's not exactly clear where Davik acquired the Ebon Hawk. The primary systems were modified so many times that the original classification and even the company that built it were hard to determine. It's possible the ship was a developmental prototype from some showroom floor, cobbled together from several different models. Key components are obvious retrofits, from the stolen navigational computers to the uncommonly powerful hyperdrive. A number of smuggler-specific customizations have been made as well, though only Davik knew where or how to access them all.

The interior of the Ebon Hawk is comprised of several sections, including a cockpit, crew quarters, medical center, tactical battlestation, cargo hold, and even a makeshift garage to store swoop bikes and modify equipment. Its weaponry consists of a gunnery station with dual turbolasers, as well as other "secret" armaments.

Ownership of the Ebon Hawk changed hands to the rehabilitated Revan and Carth Onasi after Davik was killed in an altercation following the rescue of Bastila Shan, shortly before Taris was destroyed by Darth Malak's ship, the Leviathan. Revan and crew then used the Ebon Hawk to move from world to world searching for pieces of the missing Star Map.


Page designed in Notepad, logo`s done on Personal Paint on the Amiga.
Stats by FreddyB, Descriptive text and Image from Knights of the Old Republic, copyright resides with Bioware / LucasArts.
Any complaints, writs for copyright abuse, etc should be addressed to the Webmaster FreddyB.