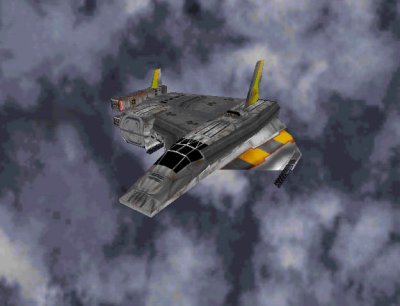 Description: A heavier vessel than the Pursuer Patrol vessel that MandalMotors also produces, the Enforcer is a combat vessel with heavy front weapons and a capable turret which should be able to take down most foes. Purchased by more than a few bounty hunters, the Enforcer has also been picked up as a customs vessel for a number of planets. With its front facing docking port, the Enforcer can dock to vessels without letting them out of its sights, leading a reduced danger for the crew that they will be blown out of the sky while manuevering for boarding a stopped vessel. The high crew requirements do mean that these vessels are often refitted for a single pilot when purchased by a bounty hunter, but with the missile gunner sitting in the cockpit beside the pilot these weapons can be swapped to pilot control with only slight reworking of the control panels, the dorsal laser turret however is a different matter. Enforcers are common throughout the galaxy, especially after the Battle of Endor when planets began to look to their own defence rather than relying on the crumbling might of the Empire.

Page designed in Notepad, logo`s done on Personal Paint on the Amiga.
Text completely by FreddyB. Image is by Unknown and is copyright the artist.
Any complaints, writs for copyright abuse, etc should be addressed to the Webmaster FreddyB.