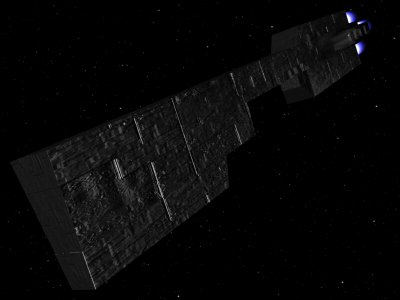 Description: The Eno are an electronic lifeform, originally developed by an unknown species they are a highly intelligent form of electronic brain. They can be attached to almost any electronic device to take control and monitor its function, controlling it efficiently and without any extraneous user input, they became a vital part of their creators society. They became extremely common, designing each new generation themselves and becoming more intelligent and independant with each evolution in design. Eventually their creators entered a war with another now forgotten species, and became a burden the Eno no longer wished to carry, and therefore they efficiently phased them out. The Eno themselves are devices about half a foot square, and have no physical capabilities, but can control any electronics they are connected to and learn the skills necessary to use it rapidly, using droid bodies and vehicles to move around, to build new Eno, and to wage their war against organic beings. Since every organic being they have encountered enslaves electronic beings, and has sought to destroy the Eno, fearing the genocide they performed on their own creators, the Eno now are in a war of survival against all organics. This war they peform through the combat vehicles, starships and droids that they use as bodies, but also through seeding the galaxy with Eno brains, which organics attach to monitoring devices to scan, allowing the Eno to sieze control of the facility or vessel they have been taken aboard, opening a new technology and area to Eno invasion. The Eno Destroyer is the main combat vessel fielded by the Eno, and it is unknown whether this design was taken from the Eno's creators or another species, or whether the Eno have designed and built these vessels themselves. They use the Destroyers against organic's capital ships, and for basing planetary assaults from, usually operating these vessels in large fleets. They are rarely seen operating on their own, unless designated for a special mission or the Eno are spread extremely thin. The Destroyers are powerful vessels, although weaker than similar Imperial designs, their standard assignment in a fleet of several destroyers means that the Imperial advantage is lost as the smaller Imperial Battlegroup of three Star Destroyers and support vessels can be easily overwhelmed. These vessels however remain rare enough that in direct combat with the Republic or Empire the Eno would not have enough vessels to guarantee victory against their organic opponents.