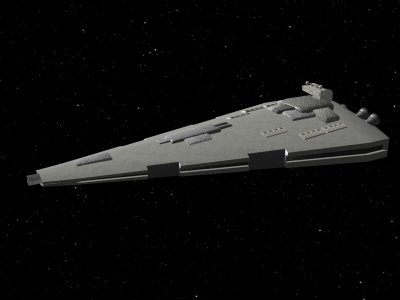 Description: The Eradicator Class Star Destroyer was a smaller replacement for the Super Class Star Destroyers introduced after the Battle of Endor once the Empire could no longer provide the resources for the massive command vessels. The Eradicator is still a huge vessel over twice the size of a standard Imperial Class Star Destroyer, with 3 times the number of Turbo Lasers, 2 times the docking facilities and fighter capability, and producing 4 times as much power. This power is mainly used to move and supply this huge vessel, but does also give the ship more powerful shielding as well. Eradicators were produced in small numbers with as few as 20 being ever completed, and although never as terrifying as Super Class Destroyers, they managed to swing the scales of power back towards the Empire by a significant amount, but were eventually crippled by the costs in both cash and manpower that they required to operate, meaning that they were reduced to guard vessels for key Imperial systems.