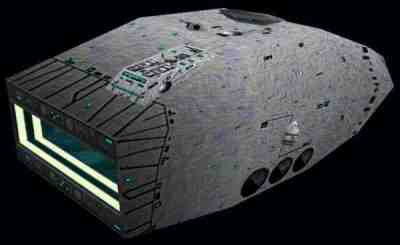 Description: The Escort Carrier is the main Imperial method of transporting Tie Fighters apart from Star Destroyers, and these vessels are mainly assigned to escort duties for convoys, or as part of the support fleet for a capital ship battle group. Too small and lightly armed to enter battle themselves, these ships can however make a good accounting of themselves when forced to, and are well armed in comparison to the freighters they often accompany. The cavernous docking bay at the front of the vessel acts as the starfighter launch bays as well as the main docking area for shuttles and transport ships, and resembles the standard Imperial docking hangars on board Star Destroyers and Battle Stations. For a fairly small ship, the escort carrier is well equipped, with holding areas, repair facilities, etc to match those aboard larger Imperial Capital ships, except of course on a smaller scale. Although the Rebel Alliance and then the New Republic are glad of any capital ships they can acquire, Escort Carriers were one of the least popular, because their landing facilities were custom designed for Tie Fighters, so even after extreme modification, they still could only carry half as many Republic Fighters as they could Tie`s, making them useful, but far less so than they are to the Empire who requires them for hyperspace transport of their fighters.