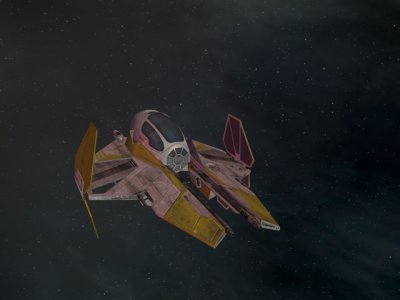 Description: With the outbreak of the Clone Wars, the Jedi saw themselves pressed into the forefront of military activity, serving as Generals in the campaign against the Separatists. The demands of combat saw advancements in the Jedi starfighter arsenal, resulting in modifications and a new generation of fighter craft.

Though the wedge-shaped starfighter design was still in use by war's end, a newer model had earned the spotlight for its use by renowned Jedi heroes, Anakin Skywalker and Obi-Wan Kenobi.

This new model was much more compact, cutting away a large portion of the forward spaceframe to have a forked front, bracketing a bulbous cockpit pod. Lining the inner edges of the ship's "tines" were powerful long-barreled laser cannons. The ship also had secondary cannons recessed on the outer edge of each tine. A full-size astromech rested within a spring-loaded socket on the port wing, and the craft's wingtips could fold open, revealing hexagonal panels when the ship entered combat mode. The hexagonal wings and the spoke-windowed cockpit were strong indicators of future starfighter designs to be adopted by the galactic government.

This new model also lacked a hyperdrive, so it too had to rely upon a hyperspace transport ring to achieve superluminal velocities. During the war, bigger more robust rings were used, with multiple lightspeed engines increasing their speed and range.

Ace Jedi pilots like Anakin Skywalker and Saesee Tiin pushed the Delta-7 to its limits. Skywalker constantly tinkered with his starfighter, modifying its systems to optimize performance. Based on his innovations, Kuat Systems Engineering revisited the starfighter design and developed a bold and radical follow-up to the Delta-7 with its Eta-2 Actis interceptor. Anakin Skywalker was the first to pilot this new model, though other Jedi soon followed in his path, including Tiin, Obi-Wan Kenobi and Mace Windu.

Only a Jedi pilot would be brave enough to fly an Eta-2 into combat. That's not to disparage its capabilities; rather, it is a very advanced high-performance craft that devotes most of its system resources to pure speed and power. It does so at the expense of heavy flight instruments, sensors and shields. A Jedi Knight's attunement to the Force more than compensates for these compromises.

In compressing -- yet increasing -- the performance of the Delta-7 into a frame no bigger than an airspeeder, Kuat engineers faced many challenges. Key among them was overheating. A sophisticated system of pumps, heat sinks and extendable radiator wing panels help draw heat away from the Eta-2's miniature reactor.


Page designed in Notepad, logo`s done on Personal Paint on the Amiga.
Descriptive Text from StarWars.com. Stats by FreddyB. Image copyright resides with Lucasfilm.
Any complaints, writs for copyright abuse, etc should be addressed to the Webmaster FreddyB.