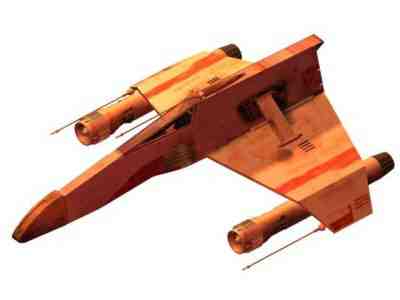 * - Although this fighter is physically identical to the one detailed in "Dark Empire", it is significantly weaker. This is due to several factors, firstly in my campaign the fighter was rushed into production, so this is actually an early prototype of the one in "Dark Empire". Secondly I don`t like the way stats were boosted up so much by West End Games, so that the X Wing (by the time of Dark Empire) and E Wing were both faster than the A Wing, with blaster cannons doing almost as much damage as missiles and torpedoes, it became silly, if West End were still doing Star Wars, I`ve got the feeling that X Wings would have a space speed of about 20 by now. Finally, I really don`t like the E Wing that much, its a fairly ugly looking ship.

Description: The E-Wing fighter is the replacement for the X-Wing, designed shortly before the war with the sith began. It had begun to be adopted by some squadrons in the New Republic before the superior X2-Wing fighter was released leading to the New Republic stopping purchases of new E-Wings. This is unfortunate since the E-Wing is a very good fighter indeed, with a superior speed, sensor package, armament, sheilds and maneuverability to the X-Wing. The E-Wing was designed with the New Republic in mind, and is easy to service and refit (all times are divided by 2), and although its wings are not moveable while in flight, they can be locked up out of the way for storage on the cramped hanger decks of New Republic Capital Ships. However its complex internal systems require the R7 astromech to operate, and the fact that these can only be purchased by the New Republic and allied governments, has led to this ship not having been sold widely at all. The few sold to the New Republic remain with Elite Squadrons, who have become accustomed to this vessel and had been equipped before the X2-Wing became available.

Page designed in Notepad, logo`s done on Personal Paint on the Amiga.
Text completely by FreddyB. Image is by TheForce.net, and copyright resides with Lucasfilm.
Any complaints, writs for copyright abuse, etc should be addressed to the Webmaster FreddyB.