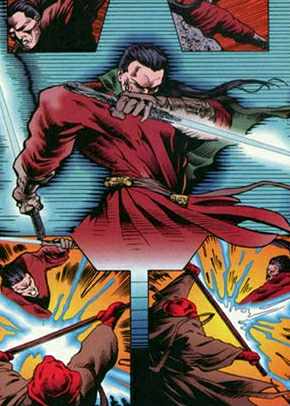 These are the known powers Exar Kun possessed and it is believed that he had access to other powers.

EQUIPMENT
CREDITS - 1,000
Blue Double-Ended Lightsaber (5D), Sith Amulet (Can use Force Scream with a range of 20 meters, at half his Alter skill and doesn’t suffer any penalties afterward), Dark Armor (+2 bonus on resisting light side powers), Sith Battleship, Alchemical Apparatus


Before Vader, before Maul, before Sidious... there was a Dark Lord of the Sith that cast a shadow of terror and destruction across the galaxy. The ancient forces of the Republic and the Jedi banded together to stop the torrent of the dark side, and bring an end to Exar Kun's rule.

He began as a simple student, studying under the revered Jedi Master Vodo-Siosk Baas. Like the dark apprentices that would follow throughout history, a basic impatience undermined all of Kun's training. His pride did not have the boundaries that his instruction did. Eager to ascend beyond his Jedi abilities, Kun abandoned his master and journeyed to the strife-torn world of Onderon. There, he encountered the spirit of Freedon Nadd, an ancient Sith who gave him further instruction.

Through Nadd's disembodied commands, Kun voyaged to the Sith mausoleum world of Korriban. There, ancient Sith spirits tried Kun's resolve. His body was crushed in a cave-in of tons of rocks, and Kun could not call upon the Force to help himself. Yet, the dark side offered what the Force couldn't. By giving into his fear and rage, Kun was able to heal himself and clear the obstacles. He emerged from the caverns transformed, fueled by the dark side of the Force.

Following examples of ancient Sith Lords that preceded him, Kun came to the long forgotten Sith temples of Yavin 4. In Sith tradition, he took on an apprentice, the fallen Jedi Ulic Qel-Droma, and the two unleashed a scourge that would forever scar a galaxy. In the ages before Darth Bane's restrictions, Kun and Qel-Droma were able to recruit more Jedi into their ranks. Many young Jedi turned against their masters and slew them. Kun himself extinguished the life of Master Baas Baas in the halls of Coruscant's Senate chambers. It was a dark time indeed.

Kun was fixated in unleashing pure, unbridled power through ancient Sith means. He practiced Sith magic and alchemy, crafting horrific creatures on the moon of Yavin 4. He brandished a Sith lightsaber with twin blades that increased the potent weapon's lethality. His followers triggered ancient technologies that detonated the stars of the Cron Cluster, wiping out entire worlds and searing the surface of Ossus.

Finally, a joint Republic and Jedi taskforce came to Yavin 4 to capture Exar Kun. He knew he could not survive the attack, so he summoned his dark side energies and trapped his consciousness into the temples his Massassi warriors had built for him.

For four millennia, Kun's disembodied spirit slumbered. The presence of a dozen Force-sensitives stirred his consciousness. It was now several years after the Battle of Endor, and Jedi Master Luke Skywalker had begun training Jedi at an academy on Yavin 4. Exar Kun's spirit sought to corrupt Skywalker's students and bring about a dark side reign again. He controlled Luke's most powerful student, Kyp Durron, but in the end, Luke's students united and were able to finally dispel Kun's spirit.